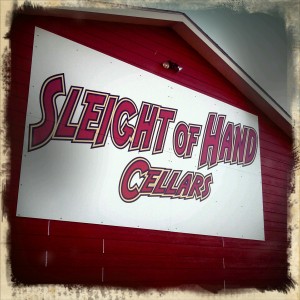 Wine maker Trey Busch is magnetic and outgoing, and we are not surprised that his wines are much the same.  He is the biggest Pearl Jam fan I’ve ever met even heard of.  Legendary, in fact.  If you read any wine press (I don’t mean points, I mean the press that actually has something to say about wine.  Although, if points are what move you then he has those too!) you’d say the same about the wines he makes as well.

Launched in 2007, Sleight of Hand Cellars has but one focus, and that is to craft exceptional wines from exceptional vineyards in the state of Washington. The winery has only been in operation for a short time, but in that time, Sleight of Hand Cellars has been named as one of the “The Next Generation” of up and coming wineries in Washington State by Seattle Magazine in July of 2008, as well as  one of “The Next Cult Wineries” by the same magazine in August of 2009. 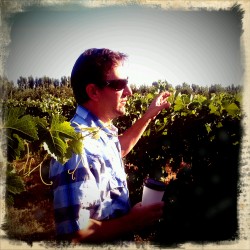 Trey in the Funk Vineyard.

Trey never rests on his laurels, and is always pushing to make better wines with every vintage.  Recently Sleight of Hand joined forces with Dusted Valley to buy “Stoney Vine Vineyard” in the Rocks.  Knowing what Trey has done with his Funkadelic Syrah we can’t wait to see what comes from Stoney Vine.